Yesterday, I decided to take my life in my own hands and wonder down to Peckham without a knife proof vest, to visit the South London Gallery.

Stereotypes aside, Peckham is quite an interesting place to visit, not least because it has the most bizarre library building ever: 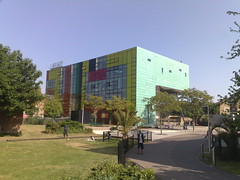 Most colourful library in the world
Originally uploaded by hmmm_tea 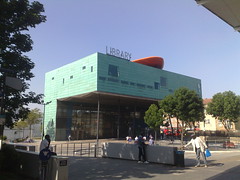 Even more bizarre on the other side
Originally uploaded by hmmm_tea

Highly colourful, lambda-shaped with strange wire caging under the overhang. The sort of building they wouldn't have let them build anywhere else, it's excellent!

The Gallery itself was quite quaint, but the exhibition they had on (Marie Cool & Fabio Balducci's Untitled 2006-2009), was a bit on the pretentious side.

On the way back, I explored Burgess Park, which turns out is actually a Tardis. It looks really small on Old Kent Road and yet it stretches all the way to Camberwell (and, rather usefully at the time, Peckham via the Surrey Canal path).

Wondering through the park I stumbled across this, which seems an interesting thing to do to an old pub: 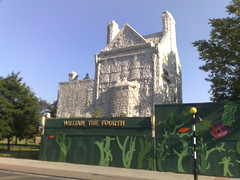 The bizarre fate of William IV
Originally uploaded by hmmm_tea

No idea what's it's covered in or why, but it's strangely cool in a bizarre sort of way.
Collapse