So, last night's tour was bizarre, but cool.

It was when we were passing the Young Vic that someone had the idea that we should ask if we could do a dance in the bar there. They said yes, so I can now claim to have performed at the Young Vic! It was actually a fairly crap place to do a dance, as the floor was terrible, the acoustics weren't much better and the audience were a bit tame, but it's certainly up there with the Royal Festival Hall, Lincoln's Inn and Trafalgar Square for prestige points.

However, the most bizarre point of the evening, was when we came to the Hole in the Wall and found this lot: 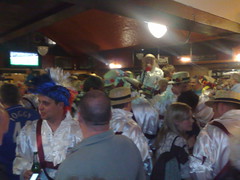 A load of rugby players dressed as Morris dancers! (no, I've never seen a Morris dancer in a frilly silk shirt either, but it was funny)

They must have been one of the best audiences we've had.

So, in a case of playing with my new mobile too much to see what it would do, I managed to lock myself out of it (without even having a PIN switch on - don't ask!) and now need a PUK code to unlock it.

As it's a T-mobile SIM, I went onto the T-mobile website to find out the PUK code (I know you can get the O2 ones off their website fairly easily) and indeed they have a page to tell you how to get your PUK code.

Have you entered the wrong PIN code several times?

Not signed up for My T-Mobile yet?

So, I followed their instructions (yes, completely out of character for me) and signed up.

As with many sites, they send you an Activation PIN to clarify you are who you say you. Unsurprisingly, they send this to your mobile.

Well, at least I got a good laugh out of it all...

(Rang T-mobile this morning, as my SIM is from a third-party, I need to get the PUK code off them and their phone lines aren't open on Sundays. Bother!)

It's a musical based on a play by Frank Wedekind. I hadn't looked much at the details beforehand, so was expecting a typical teeny romancy rights of passage type thing, so was quite impressed to find out there was a bit more to it than that (but only a bit more though).

On arrival I fell from the Balcony to the Stalls. Thankfully, this was in the ticket upgrading sense rather than the literally injury sense (the balcony certainly looked a long way up to fall from). Unfortunately, there were two of us with the tickets for the same seat as a result, but they just moved one of us forward a row.

In terms of the performance itself, it did carry messages about how we treat children in particular regarding disciplin and protectionism. Although, they were central to the story itself, it felt as if they were trying to be down played to an extent. I'm guessing these were part of Wedekind's original play and producers of the new musical were less interested in the underlying message and more wanted to use the controversial nature of the story as a promotional gimic.

The play was still based in the late 19th/early 20th century, although the music itself was more contemporary. I liked the concept of doing it like that, but somehow it did not pull it off very well and contrast was a bit jarring and needed a bit more subtly to work properly. I think a lot of this was down to the fact that although the music captured hormonalness of the teenage characters it entirely ignored the fact that the society presented in the play was very conservative. The music itself was generally cliched and unoriginal, but quite fun.

Whether it comes from the original play or whether it's just from the musical production, I'm not sure, but right through the whole play there was very little doubt as to what was coming next and as a whole it would have benefited from a little more subtlety to make it less predictable. That said, there were other things that were underplayed, such as the relationship between 2 of the male characters, which although it would have been very controversial in that society and was relevant to the underlying message, was never really integrated into the rest of the story.

Overall, it is quiet fun and worth seeing, but it has the potential for a lot more than it achieves. I'm now curious to see a production of the original play (although presumably was written in German, so I'd need to find a production translated into English to make any sense of it).

Spring Awakening is currently showing at the Novello Theatre

On Friday, I went to Fifty Dead Men Walking at the Greenwich Picturehouse.

The film is loosely based on Martin McGartland's autobiography covering his time as a tout informing on the IRA during the Irish Troubles. Although it has been criticised (by McGartland in particular) as not being an entirely accurate portrayal of the events that happened it does actually clearly say that it's based on those events, but has been changed in both the opening and end credits.

Even given that, it still gives a very moving portrayal of the Irish conflict and you get a strong feeling of sympathy for the McGartland character, given it portrays him in a dangerous situation throughout most of the film. It gains your sympathy from the opening scene where you see the 1999 attempt on his life and it leaves him dying in the car as it goes back to 1987 to the main part of the story and doesn't resolve the opening scene until the end.

The film is a very uncomfortable watch in places, particularly the scenes showing the IRA interrogating the touts. However, it does demonstrate how much of a tragedy the whole conflict was and shows that the blame lies equally with all sides involved and you're left with mixture of sympathy for all those trying to promote their causes and horror for the way they're doing it.

There are really strong performances from a lot of the cast, but Jim Sturgess puts McGartland's character across with amazing conviction and you get a strong feeling of the fear that must be going through his head towards the end.

Not an easy film to watch, but worth seeing, just prepare to be shaken up by it.
Collapse